Quick analysis of New York Jets’ 24-17 loss to the Miami Dolphins in Week 1 of the preseason. Three things we learned: 1. The Jets’ young starting secondary is quickly becoming a rebuilding project…. 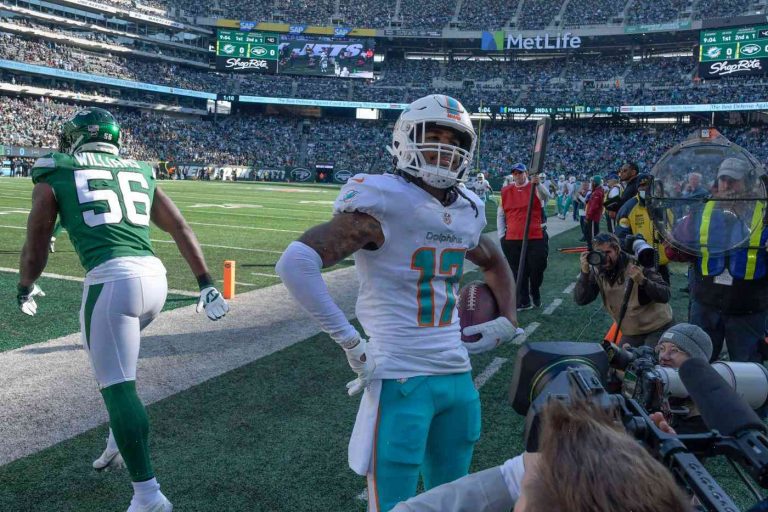 Quick analysis of New York Jets’ 24-17 loss to the Miami Dolphins in Week 1 of the preseason.

1. The Jets’ young starting secondary is quickly becoming a rebuilding project. It was really only a matter of time before they got tested, and they did so pretty quickly, against the Dolphins. Starting cornerback Juston Burris was beaten by Devante Parker in the first quarter, as the wide receiver went by him for a touchdown. When Burris left the game later in the first quarter due to a hamstring injury, the Jets trotted out veteran Marcus Williams to replace him. Williams showed there are some real learning curve issues with him, as he turned the ball over and let a touchdown pass pass go right through his hands for a 36-yard touchdown reception. The Dolphins, meanwhile, had a much different problem: there wasn’t much ground they could run on, as Josh McCown and the Jets’ offense were stymied all game long. McCown was 22-of-35 passing for 220 yards and two interceptions, and the Dolphins turned that into a 24-3 lead at halftime.

2. It wasn’t exactly a surprise that the Jets’ starting offensive line was slow. Defensive ends Robert Quinn and Calais Campbell were harassing backup quarterback Christian Hackenberg all game long. While the Jets’ star running back, Jerick McKinnon, did not do much damage outside of one 22-yard run (which he took on a screen pass from Hackenberg), he was nearly run out of the stadium by two tough defensive tackles. McCown made a few stellar throws (a 43-yard touchdown to Robby Anderson and a 41-yard strike to Charone Peake), but he struggled most of the night.

3. The Jets’ starting team only had two running backs (Joe McKnight and Elijah McGuire), and there was hardly any consistent action in the backfield. Marquess Wilson (who was carted off the field midway through the third quarter with an ankle injury) and Zechory Jarrett accounted for virtually all of the team’s rushing attempts. Given what we’ve heard all offseason about the Jets’ passing game and the very much not promising performances by the Jets’ quarterbacks, it’s understandable that coach Todd Bowles attempted to run more on the first game of the preseason. Of course, if that’s what your team is lacking, is it really worth rushing the ball a ton? Wilson’s and Jarrett’s meager totals — 11 combined carries — don’t exactly feel like a foundation for a stable rushing attack going forward.

Where they leave us: As we move towards Week 2 of the preseason, the Jets’ prospects for success this season remain bleak. While there are some positives in this loss (excluding, perhaps, the hip surgery Marcus Williams underwent in the fourth quarter), the Jets are going to have to run the ball better. At the same time, there are going to be situations when the Jets will be challenged to throw the ball effectively and, even then, McCown did a very poor job of identifying defenses and passing the ball with the quickness he did in Buffalo just a few years ago.