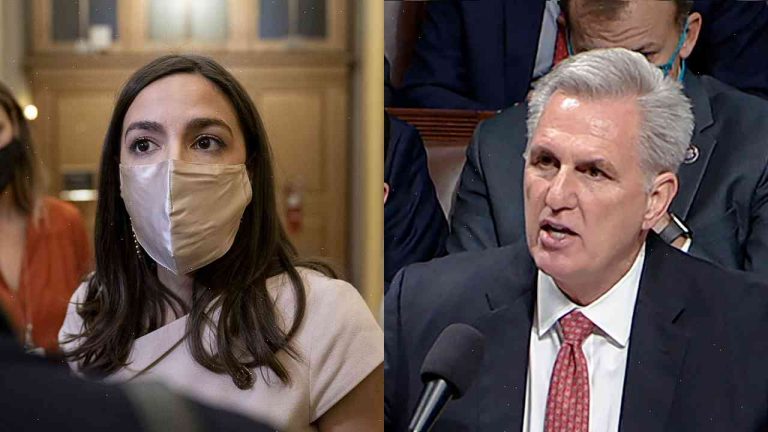 House Democratic Leader Nancy Pelosi isn’t the only lawmaker to prefer messaging over formal sessions in the House.

And Democratic Leader Nancy Pelosi isn’t the only member of Congress who prefers to speak as regularly to the House as its leaders. But few have openly criticized Pelosi so quickly. Rep. Alexandria Ocasio-Cortez has.

“Communicating so little is not okay in 2019,” Ocasio-Cortez, the 29-year-old rising star of the House Democrats, tweeted Friday evening. “When the nonstop pettiness becomes the point, we’re not doing our jobs.”

McCarthy was in the House GOP leader’s office when Rep. Steny Hoyer of Maryland, the majority leader and Democratic whip, told reporters Friday morning the morning session was ceremonial and meant to make sure there was ample time to engage in substantive floor debate.

But McCarthy and Hoyer were seated in the House Democratic cloakroom — just steps away from the Democrats’ working phones. And McCarthy was fully heard as he spoke with the House’s GOP leadership.

“It’s going to be made up,” McCarthy told reporters as he exited the chamber.

The silence between the main two leaders set off alarm bells among Democrats, who feared it was leadership sending a message they didn’t trust their rank-and-file members.

House Democratic Caucus Chairman Joe Crowley of New York told POLITICO that it was “the first time I’ve seen the chair not consult with the whip in an effort to continue the voice of the minority in a nonofficial capacity.”

“What they’re trying to do by their lack of meetings and how they communicate, is to tell people, ‘I’m going to give you the information and the whip is going to be in the way,’” Crowley said of House GOP leadership.

House Democratic Caucus Vice Chairman Hakeem Jeffries of New York, who spoke Friday morning on the House floor about the need for rules reforms, said the lack of communication is “a message we should clearly reject.”

“They [McCarthy and Hoyer] are not being inclusive,” Jeffries said. “They are being dismissive.”

House Majority Whip Steve Scalise told reporters Friday that McCarthy “is a good member of our conference and I’m sure he’ll have disagreements from time to time on how we address the House calendar and how we address issues that are important to us.”

Scalise called McCarthy’s speech “a good idea,” but McCarthy will need to be careful about listening to the floor.

“Everyone knew it was ceremonial. They didn’t know it was going to be disrupted,” Scalise said. “He was trying to make some points. They had a good deal of time before McCarthy went down there to take notes and get ready to add it to the bill. … I know that’s a strange speech, but you do have the right to use the voice of your constituents to make a point.”

But the bravado from McCarthy did help juice up the session Friday afternoon, when the House Democratic Caucus voted to ban bills from the House floor for two years without going through the committee process.

“After how long he spent in our cloakroom, I don’t think you can come down the floor and deliver some 60-second strategy speech the day after the break,” Ocasio-Cortez said in the House chamber after the vote.

Disclosure: The author has an office in Pelosi’s district.

Nike stock is booming again after a major dip

Leonid meteor shower 2018: When, where and how to watch